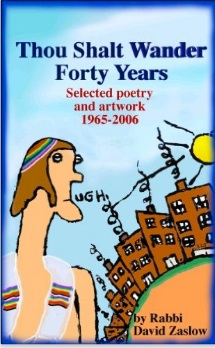 Purchase Thou Shalt Wander Forty Years from this website.

Selected poetry from 1965 through 2006 along with original pen and ink drawings. The poems take you on a journey through David Zaslow’s life from a 60’s hippy, a 70’s poet-in-the-school, to his spiritual awakening in the 80’s. The style of the poetry and illustrations will evoke poets like Rexroth, Neruda, and Dylan Thomas. The emotional range goes from humorous to the yearning of a young man for love, and a middle aged man in his personal quest for God.

Sometimes the past makes sense only as a bridge to get us from where we were then to where we are now. I don’t know if anything like that was going through David Zaslow’s mind as he put together Thou Shalt Wander; but wandering is the metaphor, and the feeling comes through the pages. In his day job, Rabbi Zaslow is the leader of Havurah Shir Hadash, the Jewish Renewal congregation in Ashland. But he came in 1970 as a wandering hippie/poet/seeker. Unlike the children of Israel, who wandered 40 years before they got around to claiming the promised land, Zaslow didn’t spend half a lifetime.

His desert was the continent between his native Brooklyn and Ashland, and when he entered grad school to study poetry at Southern Oregon State College his odyssey was only beginning. Herein dwells the poetry and doodles where a ’60s’ hipster morphs into a davvener; reads Zaslow’s blurb on the book’s back cover; where the sparks of William Blake and the Baal Shem Tov intersect; where Coney Island comes to Oregon and Zen meets Jerusalem. He found his faith at around age 40 (the third 40 to enter our story!) and moved on to King David, another pretty fair country poet. this time he was agog at what he saw as the elegance of God’s having created a universe of metaphor, where so many things became in a sense interchangeable. I was seeing correspondences, he says. He studied with Rabbi Aryeh Hirschfield. He became a rabbi. He has been at the Havurah since 1995. and by he began choosing poems, choosing the line drawings and paintings and doodles, that would make the book.

Many of the poems turn on notions of time. As early as 1966 Zaslow wrote, ‘patience yearns/in the pen/of unturned words:/flower springs/from seedless time.’ In 2001 he imagined his grandmothers, Anna and Fannie, hoping for simple things: happiness, health,/Yiddishkeit (a sense of Jewishness) for their children,/and some happiness for themselves./And those hopes/poured out down through time/are filling the cup of my life today. These poems are full of time:the twilight of months, the evening of the year, our life’s fruit, my life’s season,& soaring skylight high in time. And they are full of ghosts, including that of a young David Zaslow in Brooklyn When I was a boybusting,/waveswaggered son of the beach/in my shorebrowed/and seasinging home/called Coney Island. I had not thought of it that way, he says of the time themes.

He’s still writing poems, but they’re liturgical now, poems as prayers. We are not living in a culture that honors poetry. That’s about our culture, and maybe it’s about poetry, too….In the end, the place where Blake, Reich and the Baal Shem Tov intersect may be right outside Zaslow’s window, where they merge and transform time into a cathedral of memory. I’ve been in this house 31 years, Zaslow says. I look out at the trees, the trees that have been waving, almost like fractals, waving their leaves for 31 years. And it’s all part of one moment, trees and eyes waving at one another.